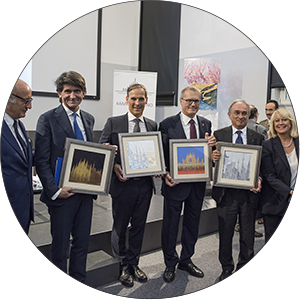 The prize is given to personalities from all walks of life, who have distinguished themselves for their commitment to the promotion of the economic, scientific, social and cultural fabric of the metropolitan area of Milan. Marco Nocivelli received it “for his extraordinary entrepreneurial career geared to values of internationalisation, innovation and sustainability, which has led him to the prestigious role of President Anima Confindustria Meccanica and of President and Chief Executive Officer of the Epta Group, known worldwide”.

The prize is a sign and synthesis of the founding values of the hardworking city of Milan, as witnessed by the same materials chosen for its construction: a solid wood base, which represents roots and tradition, connecting to an aluminium support, an expression of modernity and technology, from which transparent spires project upwards and to the future.

Marco Nocivelli, President and Chief Executive Officer of the Epta Group states, “I am very proud to receive this prestigious award, which comes with a great responsibility. My father, founder of the Epta Group, taught me that it is an entrepreneur’s duty to commit himself to being a virtuous example for society. Supporting projects based on ethical principles, such as initiatives in favour of the environment, cultural heritage, education and attention to the workers and local communities should be considered a day-to-day practice.” He concludes, “A “lifestyle” to adopt without reservations, with the goal of honouring how much we have received from life and giving the territory back resources and value.”