Epta attends the National Conference of FAI Delegates and Volunteers 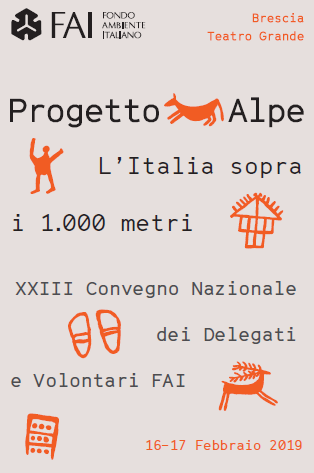 From 15 to 17 February, Epta will take part in the 23rd edition of the National Conference of Delegates and Volunteers organised by FAI, the Italian Environmental Fund, and entitled Alp project – Italy above 1000 metres. Teatro Grande of Brescia will stage the event, which intends to explore national cultural themes and to plan the roadmap to follow for 2019. The event will be attended by 800 people belonging to the top management of FAI, civil authorities, representatives of the Institutions and entrepreneurs.

Founded in 1975, the goal of FAI is to preserve and enhance the historic-artistic and naturalistic heritage of Italy through projects designed to rediscover numerous sites of this country. These principles are shared by Epta, which commits itself to social responsible progress and a greater protection of the environment and, since 2015, it has been Corporate Golden Donor of FAI. The Group has promoted multiple recovery activities over the years: in the area of Brescia, for example, restoration work has been completed with finance by the Company, bearing witness to the connection of the Nocivelli family, originally from Verolanuova, with the area.

The other initiatives made possible thanks to the contribution of Epta, include the triennial plan (2018-2020) to return Villa Vescovi, a 16th century building of astounding prestige on the Euganean Hills (PD), to its former splendour. The artistic and architectonic restoration of the facades of the San Fruttuoso Abbey (GE) inside the Portofino Natural Park, is also of particular importance. The support in carrying out these works, confirms the constant commitment of the Group towards the community and the territory, to leave future generations a rich monumental and natural heritage of inestimable value.